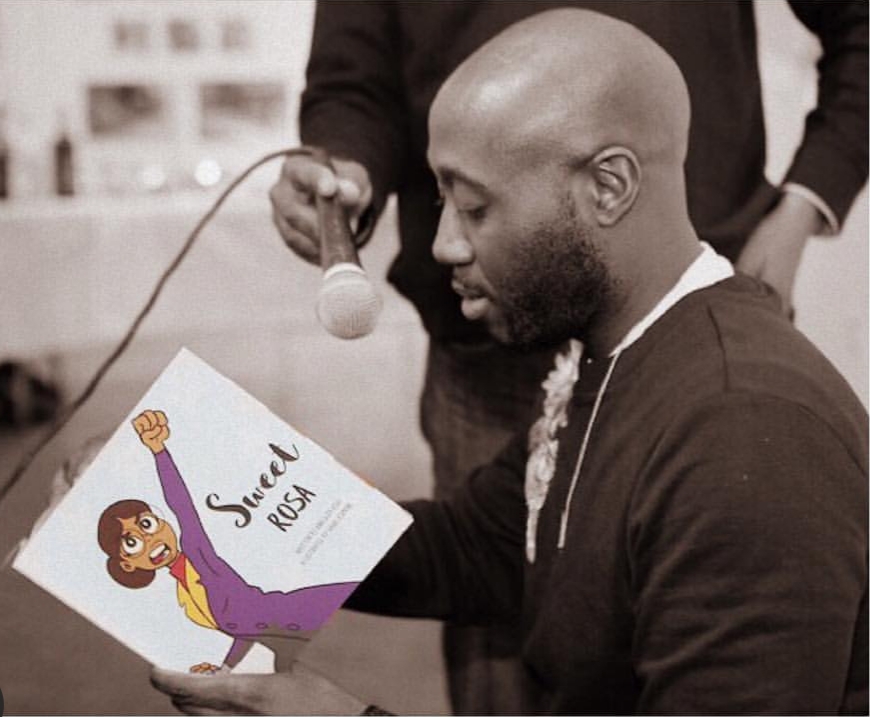 You wrote a book about the legendary Ms. Rosa Parks. What made you decide to write about a historical figure as opposed to a fictional character? What made you choose Rosa?

I decided to write about a historical figure as opposed to a fictional character, mainly because I’ve always been fascinated with Rosa Parks as a youngster. This story of a woman who did not take “no” for an answer, and stood her ground, not just for her but for the bettering of African Americans. We saw, as well as heard, about her feistiness–especially the historic event she is most known and remembered for. Much like Martin Luther King Jr., she wanted peace and harmony and, more importantly, equality and unity. This is the kindness I wanted to tap into as I wrote the book and want to highlight as children read this book.

I chose Rosa because I have seen many books about prominent male figures, primarily about male civil rights heroes, such as Malcolm X and Martin Luther King, Jr. I wanted this book to center on a woman for once. Shedding light on her importance and this courageous stance she made for women of her kind, and for “Negroes” in general, during such a turbulent and difficult time is important to me. I also wanted to shed light on how monumental this Boycott was. On the cover, illustrated by the talented David Asimeng, we wanted to capture her as this woman superhero and from a feminist point of view make her have this superpower. Her powers being the ability to unite people of all kinds, no matter your color or race.”

Where are you from and where are you located? Your Instagram is full of culture. I believe I saw a lot of New York references?

Thanks, I really appreciate that. I try my hardest to capture all of my Ghanaian culture, as well as the essence of my city within my posts. And, yes, I currently reside in New York, where I was born and raised in the Bronx. I am of Ghanaian descent, and both of my parents migrated here in the late 1970’s to make a better life for themselves and for my two older sisters and me. They’ve done an incredible job doing so for all of us!

You’re a teacher correct? What made you decide to write a book, and how have your classroom children responded to the book? I hope you made it required reading like my 9th grade teacher did when she published her first book!

Yes! Currently I am first grade elementary teacher at Global Community Charter School in Harlem. It’s my fourth straight year as a first-grade teacher and it’s been a blessing. Writing has always been a dream of mine since I was in first or second grade. God bless my first and second grade teacher, Ms. Cass, who helped me hone my craft at such a young age. At that tender age, writing was something I always wanted to do–that or become a teacher. It was great that I got an opportunity to create these characters from scratch and formulate their beginnings and endings in whatever manner I wanted it to go. The power in doing so was a gratifying feeling and it still is.

But, as you can imagine, being a teacher is, if not, the most impactful job on the planet. Although we are often overlooked, where would kids be without us? It’s also stressful at times and takes a lot of patience, but I wouldn’t have it any other way because it’s also the most gratifying feeling seeing my kids achieve their goals. That’s why most of my writing is often done during winter breaks and summer vacations, so the focus is 100% on my students (laughs). But, before I got into teaching, I wrote for several music publications, after completing my undergraduate degree at City College of NY. It’s quite a long story and long journey about how I eventually got into teaching, but I’m quite happy about how it turned out. What I learned from those past experiences is that it takes lots of patience. This is what I try to teach my students on a daily basis, lots about being patient.

Learning is a steady grind, some flourish right away, while others take time to get to their goals and dreams. And I always emphasize the importance of reading to my scholars. I always tell them LeBron James just didn’t become a superstar overnight. It took a lot of hard work and dedication. Constantly going to the courts to shoot, dribble and get to where he is. Much like reading, the more you do it and practice, the easier you will see improvements right away. Reading logs and are pretty major in my 1st grade classroom, and if you want to have a special lunch with Mr. Osei on a Friday, it’s one way to get that chance (laughs).

What’s something major you wish you’d known before entering the literary world?

One major thing I wished I knew before entering the literary world was that success doesn’t come overnight. You’ll get knocked down for sure, but it’s how you turn things around, is the major key. Time and time again, I’ve been rejected or told no. In fact, I have a long list of publishers, bloggers, websites, editors, and more who have told me no. I will never forget, but it was my perseverance that kept me going. It hasn’t been an easy road, and it has taken me four to five years to get my first book published and sold officially. Fortunately for me, well, many of my friends were also writers and publishers, so they kind of understood that being told no or being rejected is part of the job that makes you stronger in the long run. With lots of support and believing in myself, you can say it softened the blow and after that, I really had a more positive look on things. Mainly to not stop and keep going until I got a yes!

What’s the level of difficulty in becoming a self-published author?

One thing I can say is that it’s a tedious process. You go through so many revisions and drafts. As I was writing my first book, “I always thought, “What I can do to make this book perfect?” So, as I was writing “Sweet Rosa,” each idea for each page came to life in my head, so these same ideas were bounced back and forth between my editor and the illustrator to see what fits and could work. In the process of it all, it took a full year to get released, after countless edits and whatever changes there needed to be. After all the edits were completed on my end, it then went back to the editor who put his finishing touches on it, from the liner notes to thank you’s and okayed artwork, and then it went through the publishing stage. A major thanks to Francis Wilson, who I’ve been blessed to know for years and for making this all happen. Not only does he serve as the editor, but he served as the final publisher, releasing it through his indie publishing imprint, International Publications Media Group. It’s always been a dream for us to do something big — to impact the world. So to see this all come true is amazing. We’ve dreamed of this since we were 14, so it’s a blessing for sure.

Do you have a message to share with young boys who find it hard to enjoy reading and writing?

Yes, my message to them that even though it may get difficult, “Always stick to your guns, creatively and stylistically.” Don’t hold back, let the pens do the talking and your brains do the walking. It all comes down to hard work, so if you put 100% effort in it, it’ll all come back full circle, and that’s how life works. Don’t ever let someone tell you, you can’t do otherwise. Dreams are always in arms reach. I want them to think about it like this. Here are some key takeaways as to what they can do to fulfill their writing dreams: Always jot down your ideas no matter where you are, because that idea could become the next big thing. Keep a journal handy, so whenever it’s time to formulate or draft your ideas, it’s accessible to you. Technology is at the grasp of your hands. Record yourselves saying or speaking the ideas out loud, by either a phone, tablets, computers, whatever it may be. Along with my journal, I record my ideas onto my phone. It’s important that these ideas remain intact from the time you first thought of it.

A former student of mine at Boys Prep once told me he was inspired by me for just writing a book, and wanted to know the ins and outs, as he was attempting to make his own book too. He was so eager to know the publishing process. I was highly impressed about how rich his ideas were, along with his drawings. I told him, ” I love how the pictures and details match the words on each page,” and he responded by saying, “Yes, I remember you saying that to us when you showed us your book.” He proceeded to say, “I wanted everything to be similar to yours, Mr. Osei.” That touched my heart. It really did. 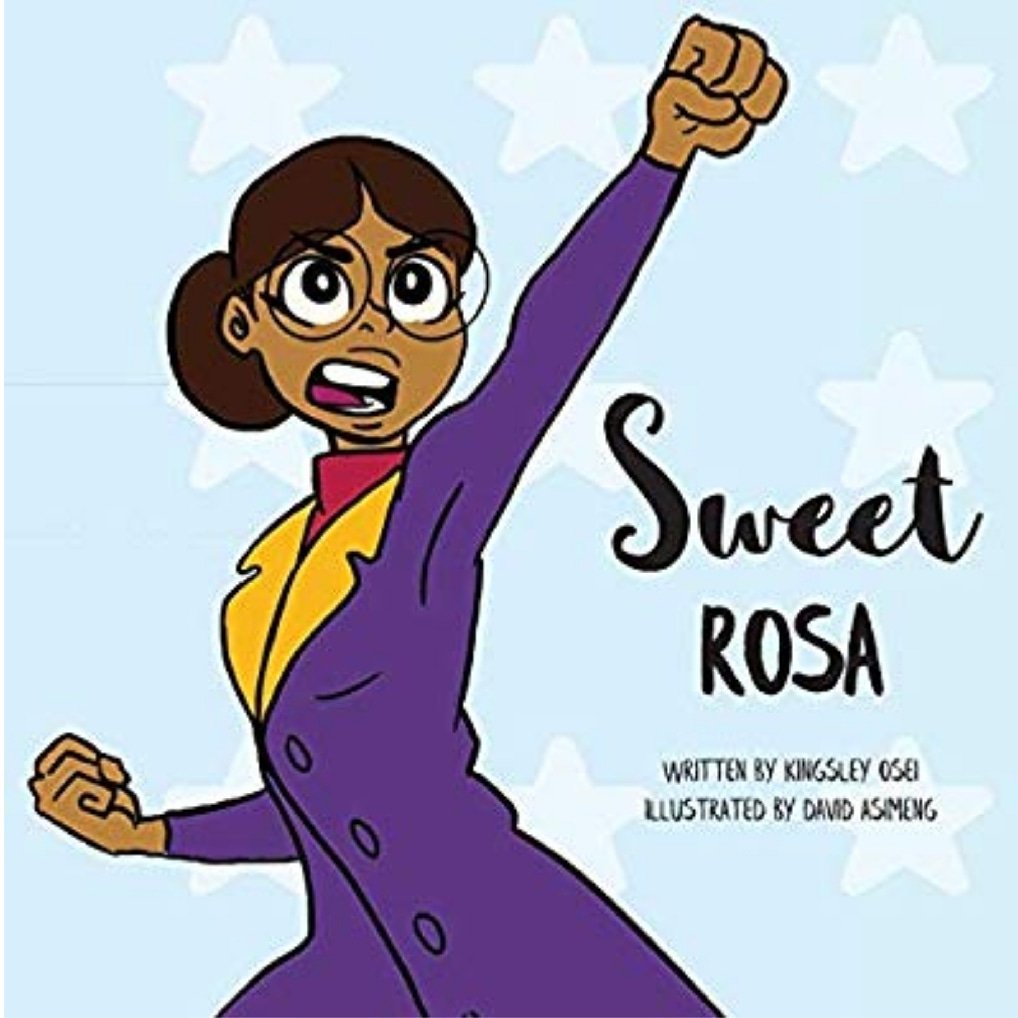 You can connect with the author via the following links: